America Has a $15 Trillion Problem. Make Sure It’s Not Your Problem

Last week, we covered one of the most pressing personal finance tasks of the year—building up your emergency fund.

I mentioned that it’s even more important than paying down debt. But eliminating debt is still a top financial priority. Sounds obvious—but Americans seem to have become inured to debt.

Last year, total US household debt passed $15 trillion, as you can see in the chart below. And the average US household with debt owes over $150k. Yikes! 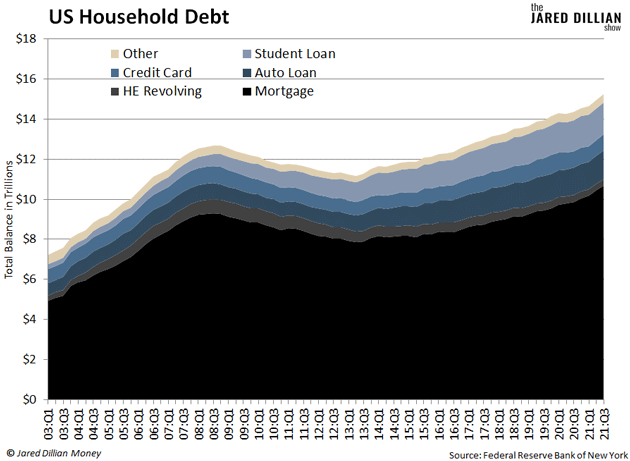 Here’s the thing—debt is not an inescapable fact of life. There is no better feeling in this world than knowing you are 100% debt-free. No student loans… no mortgage… no credit card debt. Zip. Zilch. Nada.

So, how do you get there?

Step one is to pull your head out of the sand and tally up your debt. All of it. No matter how scary that might be.

Here’s an example to get you started:

Okay, you’ve faced reality. That is a major step in the right direction. Now you have to decide which debt to eliminate first.

I’ve heard some bad advice about this. Lots of people recommend an infantilizing strategy called the “snowball method.” This is where you pay off the debt with the lowest balance first. It’s an easy win, and that’s supposed to motivate you to keep going.

I don’t like the snowball method at all. Your smallest debt might not be your debt with the highest interest rate. In that case, you’ll wind up paying more in the long run.

Then you have credit card debt, which is unsecured. If you don’t pay the bill, eventually the account will go into collection, and you’ll get a lot of unpleasant phone calls.

You could try to consolidate, but it’s hard to make defaulted credit card debt go away. You might reach some sort of settlement, but eventually, you will have to pay it unless you declare bankruptcy.

Next, you’ve got student loans, which cannot be discharged in bankruptcy. They just follow you around forever until you do something about it.

So, where do you start? Well, it’s hard to pay down debt if you don’t have a place to live or a car to drive to work.

Credit card debt carries higher interest rates than secured debt. So, in theory, you should pay your credit cards off first. But if you lose your house or car, you’re really stuck. So, it’s generally a good idea to prioritize your mortgage and your car loan.

Once you’re on top of the priority secured debt, the student loans are next. Then you focus on unsecured debt with the highest interest rate.

Sure, the snowball method might give you a psychological victory, but you pay more interest that way. How is that good?

Keep in mind, you have to make the minimum payments on all of your debts during this whole process. The priorities we just covered are for debt elimination. It’s a system for ranking which debt to throw every last penny at until it’s gone.

A family member once told me he had mid-five figures in credit card debt. He was paying $7,000 a year just in interest.

That is terrible, but he’s far from alone. I’ve heard from so many people suffocating under piles of debt that I wrote a practical guidebook to help. It’s called Mastering Your Debt, and it’s packed with straightforward strategies for eradicating all of your debt—for good.

There’s no way around it: If you are in debt, it is holding you back from fulfilling your potential. But you can get your life back. Click here to access your copy of Mastering Your Debt now.

Your Most Critical Financial Task of the Year

Saving for Retirement Isn’t That Complicated