Everybody Has Stories About Shortages Right Now

Everybody has stories about shortages right now.

Cleaning supplies are disappearing. All the toilet paper is gone again. And you can’t get cat food at the grocery store—you have to order it online.

Then you have the labor shortages. We tried to eat at a local Italian place the other night, but we couldn’t get a table. There was a huge crowd standing outside when we walked up, and the host was beside himself, because they only had two cooks and two servers. He said he would text when he had a table. An hour later… still no table.

A healthy economy is not plagued by these kinds of shortages and disfunction.

This Is Biden’s Economy

Everybody knows that the shortages—and rising inflation—started when Biden became president. He can’t escape that.

Really, though, this is not all Biden’s fault. The Federal Reserve deserves half of the blame, largely for keeping interest rates so low. And this is also the fallout of actions that Trump took as president. Remember, he signed off on the stimulus checks. He signed off on the extra unemployment benefits.

But Biden continued the free money parade. And inflation really accelerated after he took office—partly for psychological reasons. People began to expect inflation, so they acted in ways that created inflation. 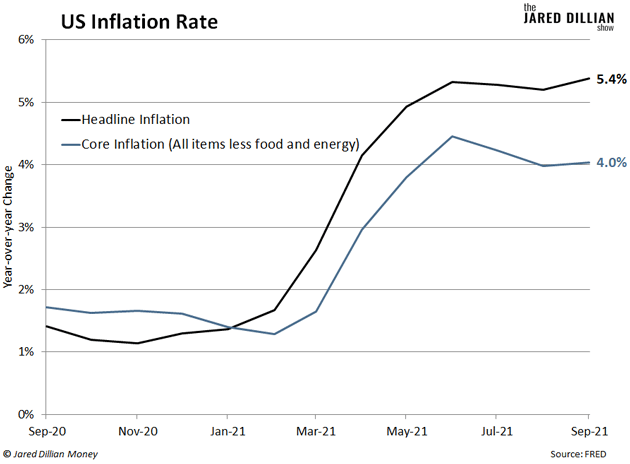 Of course, those are politically unpopular choices. So, here’s what’s going to happen…

Inflation is going to go higher and higher, until it gets so high, and people are so miserable, that they will do anything to make it go away. Unfortunately, I don’t think that will happen until inflation reaches 20–30%.

In other words, it’s going to take a lot of economic misery before the Fed or anyone in the government is willing to do anything about this.

What You Can Do

People are getting used to the bare shelves. For now, it just means settling for your third favorite brand of something, or driving to another store, or waiting two months for the Christmas gifts you ordered online.

However, the shortages may eventually get bad enough that you cannot buy food because people have ransacked the grocery stores. Then you will really be stuck.

I am not one of these doomsday preppers. But I’ve been telling people to go shopping. Fill up your pantry. Fill up your freezer. And if I’m wrong, you have a bunch of food in your house, which isn’t the worst thing in the world. Just think of it as low-cost insurance.

The other thing you can do is hold assets that give you positive exposure to inflation. Things like stocks, gold, and real estate. (There’s a reason I designed The Awesome Portfolio with substantial allocations to all three.)

As for the people who cannot afford to invest, they will simply have to take the hit. The Fed claims it’s helping poor people by keeping interest rates low, but it has it completely backward. Inflation hits the poor the hardest, because they do not have the means to protect themselves from rising prices.

Everybody who can protect themselves should take steps to do so now.