You Don’t Have to Believe Nutty Stuff to Own Gold

One long-running theory claims that the federal government has something called the Plunge Protection Team, or the PPT. If the market drops toward the end of the day, the PPT swoops in and rallies the market before it closes.

Or, so the story goes. I’ve never believed a bit of it.

There’s a similarly crazy conspiracy theory element among gold investors. But here’s the thing... you don’t have to believe a bunch of crazy stuff to own gold.

When I want exclusive insights into the gold markets, I turn to experts like Ross Beaty, the founder and CEO of Pan American Silver (PAAS) and Equinox Gold (EQXWF). Ross is one of the many distinguished speakers at our first-ever virtual Strategic Investment Conference, which happens May 11─21 and contains five full days of presentations and panels. I’ll be there, too. See our current list of speakers and topics, and reserve your spot, here.

And you absolutely do want to own some gold. Especially right now, as we touched on last week. Today we’re going to take a closer look at why...

The Gold Standard Is Never Coming Back

Long ago, the US had a gold standard. This meant people could exchange their dollars for a fixed amount of gold.

The US dropped away from a strict gold standard in the 1930s, and President Nixon abandoned it altogether in 1971. Since then, the dollar has been a “fiat currency.” Meaning its value isn’t tied to anything tangible like gold. Those little green pieces of paper, and the digits in your bank account, are only “money” because the US government says they are.

A gold standard is inflexible. So it stops the government from doing things like quantitative easing (money printing), which lays the ground for inflation or even hyperinflation.

I’ll be frank: I would like the US to return to a gold standard, but that is NEVER going to happen. So we’re stuck in a world of unlimited QE and other Fed funny business.

Which means this is a world where you want to own gold.

Gold Does What It’s Supposed to Do

Yes, I think it’s a little weird that people invest in shiny rocks. However, this has been going on for 4 or 5 thousand years. Some people say technology will change that. Yet it keeps happening.

The fact is, gold has maintained its purchasing power over a huge span of history, and that isn’t likely to change.

Over the last 70 years, for example, gold's inflation-adjusted annual return was 2.1%. In other words, gold has held its purchasing power. And that's what it’s supposed to do.

Many investors argue that gold performed poorly at the beginning of the current crisis. Initially, yes, it slipped from around $1,700 per ounce to $1,470 in mid-March. Now it’s back up around $1,700. And it’s likely going higher. 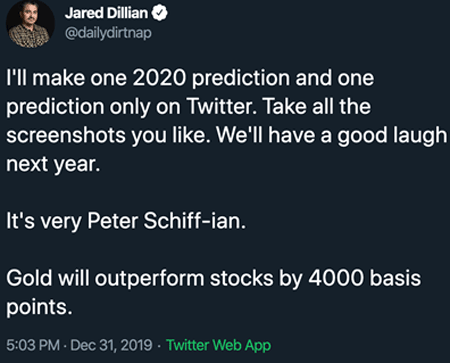 So really, gold has continued to do what it’s supposed to do. It’s performed pretty well. And, given the government’s reckless monetary actions—including the MMT stuff we covered last week—it’s going to perform well long after the acute phase of this crisis passes.

The Fed started its very first round of quantitative easing, called QE1, during this period. People thought it would cause a lot of inflation, so they bought a lot of gold.

The inflation never happened, but gold still climbed higher because people feared it was lurking around the corner.

Once again, people fear this will result in inflation, and reasonably so. I have the same concerns myself, as I’ve mentioned in this space before.

Gold is bound to keep rising in this environment. Because the Fed can print an infinite number of dollars, but it can’t print gold.

The price of gold also goes up when the federal deficits grows, as it’s doing now. This was the other reason gold more than doubled between 2009 and 2011: The government’s annual budget deficit soared into the $1.4 trillion neighborhood.

Now the government is talking about running the biggest deficit in the history of the United States. Even bigger than we had in World War II.

And that bodes well for gold.

Something to Get Excited About

Gold has a lot going for it: QE, inflation fears, and a giant budget deficit, to name a few.

However, the biggest reason to own gold is that it smooths out the volatility in your investment portfolio. Add a little bit of gold, and you’ll pretty much get the same overall returns. But you’ll cut your volatility in half.

Now that is something to get excited about. It’s not about conspiracy theories or other nutty stuff. It’s about better risk-adjusted returns.

Today, and in the years ahead, you want to allocate 20% of your investment portfolio to gold.

Normally, you could do that by purchasing physical gold and storing it in a home safe. However, at this point, it’s next to impossible to buy physical gold bars or coins. The folks who saw this crisis coming already bought it all.

But you still have options.

Right now, the best way to invest in physical gold is through a gold ETF. There are several options out there—I recommended my top choice in my premium investment service, ETF 20/20, last month. You can get all the details by taking ETF 20/20 for a test spin.

Gold mining stocks are also an option, but they won’t smooth out the volatility in your portfolio the way physical gold would. So again, a physical gold ETF is really your best bet.

A couple of final thoughts—

One, investing in physical gold is fun. I mean it, and the world is definitely short on fun these days. And two, you want to be ready to sell when the time is right, so keep tuning in.

Where Will the Money Come from?

Don’t “Snowball”—This Is How You Pay Off Debt