Inflation Bull: Eight Ways to Profit
As seen on...

“I’ve already made gross amounts of money, and we’re still very early in this.
To say I’m bullish on inflation is an understatement.”
— Jared Dillian

30% of all US dollars in existence were printed in the last 10 months.

See that giant uptick on the far right? That’s us printing trillions of dollars.

In fact, we printed more money in one month last year, than we did in the first 200 years of our country’s founding.

I read an article recently that said,

“With that first trillion [USD printed] we defeated British imperialists, bought Alaska and the Louisiana Purchase, defeated fascism, ended the Great Depression, built the Interstate Highway System, and went to the Moon.”

What did we do with the $3 trillion we printed last spring?

We fought over toilet paper.

The pandemic reinforced what the Fed and Congress have been doing for the last 30 years—responding disproportionately to crisis by printing money and passing it out like the paper it is .

The Fed and Congress have essentially messed with our fiscal policy in a way that is utterly unprecedented.

They’ve passed three record stimulus bills worth a collective $4.8 Trillion dollars and are already talking about a fourth.

It’s very likely we’ll be passing more stimulus in the fall, and thenanother one next spring.

How many more will we have? I’ll leave it up to your imagination.

Here's something else to wrap your head around: This administration has already thrown out a proposal for a $3 trillion infrastructure deal—that they want to pass this year .

I'm not here to argue the details of what is, or may be, included in any of these bills, but I will say this…

Once you start rolling down the spending hill, it’s pretty hard to stop.

That’s evidenced by our current federal debt, which is projected to reach roughly 102% of gross domestic product this year . 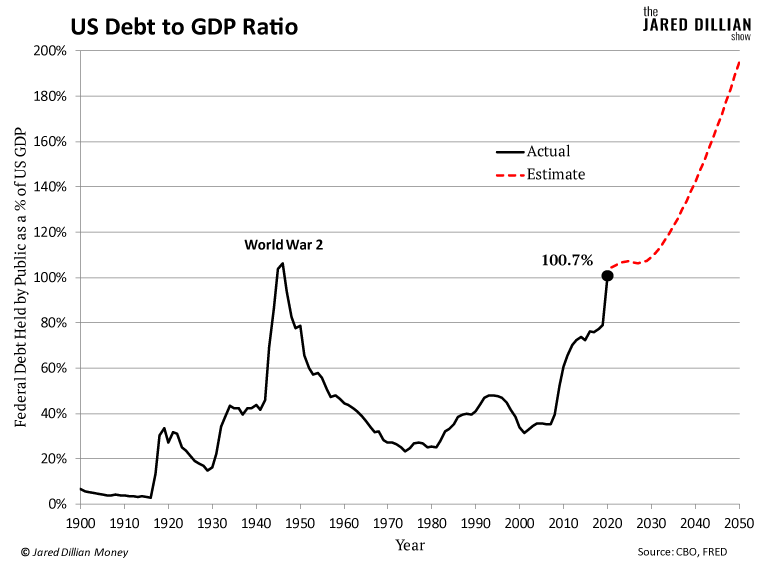 At least then, we built planes, tanks, aircraft carriers, and military bases in the span of a few months.

This time, we sent out 160-million-dollar stimulus checks and hoped that people used the money to pay their bills and buy food… instead of what many ended up doing—gambling on the no-fee trading app Robinhood and “investing” in Gamestop.

This Is a Classic Setup for Inflation

In 2008, during The Great Recession, we got asset price inflation. Prices for essential goods and services stayed steady.

This time around, we weren’t so lucky.

All of those dollars our government printed and handed out?

They are all chasing the same goods.

And like the title of this section states… that’s the “classic set up for inflation.”

It’s already hitting us at the grocery store...

And for some reason, potato chips shot up by 17%.

“People will have to get used to paying more for food. It’s only going to get worse.”

But it isn't just your groceries that cost more…

And finally, home prices are the highest they’ve been in 30 years. In some states, like California, homes are a full 25% more expensive.

Don't be surprised to see these essential needs— and many more everyday items —head even higher.

And you won’t be able to look to the Federal Open Market Committee for help, because...

The Fed Is Full of It

The Fed has been talking about offsetting a period of “previous underperformance” by letting inflation run over 2%.

They are making the assumption that they’ll be able to just snap their fingers and stop it at the percentage point they like (say 3%–4%)... which I would define as the pinnacle of hubris .

I believe we are in for a period of not only higher inflation, but volatile inflation.

I can see us hitting everything between 2% and 10% in the coming years. 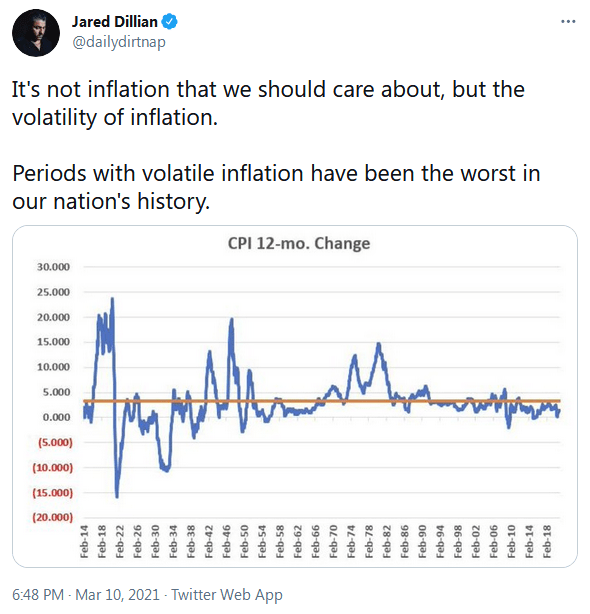 For many of the unprepared (that’s not going to be you or me, by the way), this will wreak havoc on their retirement.

John Mauldin, a respected financial expert, put it this way,

“Central banks all over the world, including the Federal Reserve, have an aspirational goal of 2% inflation.

If you are age 30–40, that means every dollar you save today will lose half its value by the time you need it for retirement.

They literally plan on destroying the value of your dollar. The only real debate is over how fast to destroy it.”

Here's another number you should know:

That's how many Americans say they are “very concerned” about inflation.

Should you be “very concerned” too?

What you should be is excited.

The coming inflation isn’t a loss to be avoided,
it’s an opportunity to profit.

If you position yourself correctly (which I can help with), there is serious money to be made.

I intend to make plenty of money off this. I’ve already made money off it, and these are still the early stages. To say I’m bullish on inflation is an understatement. I’ve revved up.

In fact, on a recent call, I was discussing my inflation plays with a couple of fellow investors.

I said, “This is a lot of fun. It's the kind of environment I do really well in. I’ve already made gross amounts of money, and we’re still very early in this.”

And with inflation still below 2%...

This Is the Perfect Time for You to Take Action

Now is the ideal time to “grab the inflation bull by the horns” and make it your own.

But because of what I see coming, I’ve knocked that up to 11.

I suggest you do the same— before it’s too late. 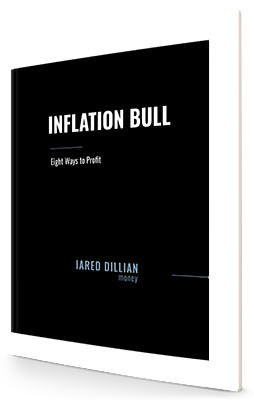 All eight of my heavily researched, handpicked “bull food” picks are projected to return double and triple digits as inflation rises and the panic surrounding it increases. (And as a bonus, three of them produce dividends of 1.5% to 3.5%.)

My top pick has the potential to return 240%.

The stocks I’ve laid out in Inflation Bull: Eight Ways to Profit are powerful because not only do they benefit from rising inflation, they negatively correlate with the majority of what you may have in your current portfolio.

Put simply… you want a diversified portfolio that can withstand market volatility.

I’m handing you that with this report.

I’m not going to charge you an arm and a leg either.

Most guys in the “newsletter business” would try to charge you $499 for this information. And while I think it's worth every penny…

I’m not most guys, and I want to give as many peple access to it as possible.

So, I’m going to offer you Inflation Bull: Eight Ways to Profit for 60% less than the standard price.

That means, you can download the full report, read my in-depth research, and access the exact tickers you need to invest TODAY for…

The choice is yours...

You can fill out the form below and access Inflation Bull: Eight Ways to Profit today, and potentially make a hefty amount as inflation drives panic and prices higher…

Or, you can sit back and hope rising inflation doesn’t bite you in the _ _ _ (you can guess what I mean), and wipe away half, or more than half, of your retirement.

I’d go with Option #1, personally. I like making money.

Please note all investing carries the risk of loss and you should only speculate with capital you are prepared to lose. The fact that we have made information available to you is neither a recommendation that you enter into a particular transaction nor a representation that any investment described herein is suitable or appropriate for you. Many of the investments described by Jared Dillian Money involve significant risks, and you should not enter into any transactions unless you fully understand all such risks and have independently determined that such transactions are appropriate for you. Any discussion of the risks contained herein with respect to any product should not be considered to be a disclosure of all risks or complete discussion of the risks which are mentioned. You are advised to discuss with your financial advisers your investment options and whether any investment is suitable for your specific needs prior to making any investments. Purchasing a Jared Dillian Money publication does not make us responsible for your investment results, and you will bear the risks of any investment you decide to make. Sometimes our investment recommendations may be wrong or the timing may be off. Furthermore, the investment returns described and detailed above should not be read as a promise or guarantee of your personal returns using Jared Dillian Money.

If you are not 100% satisfied, simply cancel any time within 30 days and get a full refund. Your satisfaction is our primary concern.