The Best Way to Election-Proof Your Investments

Election day is less than a week away.

And every investor wants to know how the outcome will affect the stock market.

If you look back four or five months, everyone thought that a Joe Biden win would be bad for stocks. That made sense. Biden plans to raise taxes—including corporate taxes and taxes on investment income.

Now the consensus is that Biden would be good for stocks. Because the Democrats would spend an estimated $4 trillion on economic stimulus and $1.3 trillion on infrastructure.

Good for Stocks, Bad for the Economy

The first question you want to ask is: Is that good for the economy?

The answer is no. For one thing, we won’t have the money to pay for it, even with the tax increases. So, the federal government will have to take on even more debt.

The second question is: Is this good for stocks?

The answer is yes—a Biden win would certainly be good for some stocks.

It’s not that hard to think of publicly traded companies that would benefit from more infrastructure spending. Caterpillar (CAT), which makes construction equipment, is one example that comes to mind.

Something can be good for stocks and bad for the economy.

People have a hard time wrapping their heads around this. I even had to explain it to my Wall Street colleagues when Hurricane Katrina hit in 2005.

Hurricane Katrina caused $81 billion in property damage and $150 billion in economic damage. And yet…

In the year after the hurricane, US stocks rose 7%. 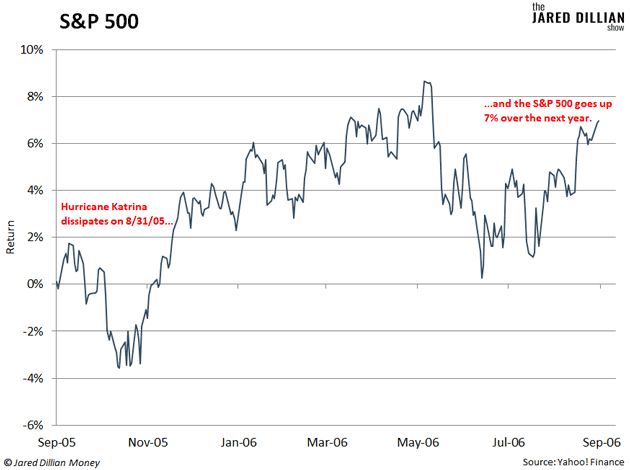 My colleagues looked around and said, “This makes no sense.”

But it did make sense. Because a lot of publicly traded companies were tasked with rebuilding. So, their share prices were bound to go up.

Now, some of you are thinking, “Wait, does that mean the hurricane was good for the economy?”

I’m paraphrasing here—but imagine a baker working away in his bakery. Then a boy playing outside throws a rock through the window, and the baker has to hire a glassmaker to fix the window. It costs him $50.

People watching from afar think, “Huh, the kid breaking the window boosted the economy.” Because the glassmaker’s income just went up.

But that is the fallacy.

If the baker didn’t spend the $50 on the window, he could have put that money to better use elsewhere. So, really, the economy hasn’t been boosted at all.

Now, imagine that the glassmaker is a publicly traded company. The boost to its income is going to push up its share price. Which is more or less what happened with Hurricane Katrina, but on a much larger scale.

Billions of dollars were spent rebuilding New Orleans and the surrounding areas. And all of that money could have been put to better use, had it not been for the hurricane.

In other words, the hurricane did not boost the economy. But it did boost stock prices.

Which brings us back to Biden…

The Stock Market Thinks Biden Is Going to Win

If Biden gets elected, taxes are going to go up—that much we know. But the stock market does not seem to care.

In fact, it is telling you that Biden is going to win. All you have to do is look at the Invesco Solar ETF, which invests in solar energy. The fund has surged 150% in the last six months. 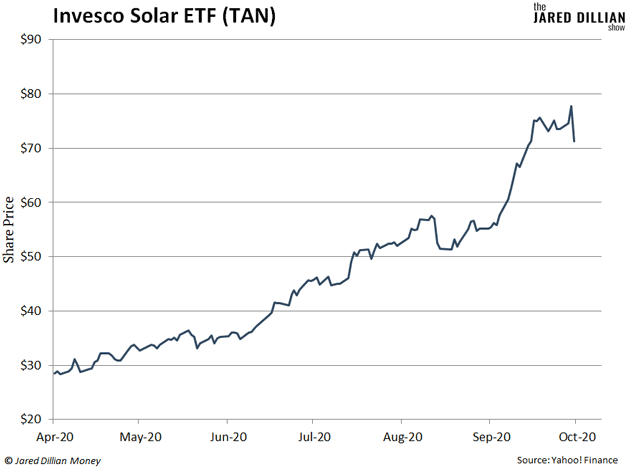 Biden, of course, has pledged trillions toward green energy initiatives. TAN would not be climbing higher if the market thought Trump was going to win.

The reality is, no one knows how the election will play out. The losing side might contest the results, and it could be weeks before we know the final outcome… which is a coin toss, really.

But the good news is, as an investor, you do not need to know what happens next.

If you’re familiar with the Awesome Portfolio, you understand how this works. See, I designed the portfolio to keep going up, with minimal volatility and minimal risk of a drawdown, pretty much no matter what.

There’s no need to make any last-minute changes, or panic when something big happens. Once you get your personal Awesome Portfolio up and running, simply check on it once a year or so. That’s it.

I’m sure you care about the election outcome—but your portfolio shouldn’t. Get all the details on The Awesome Portfolio by clicking here.

Can You Afford It? Use This Simple Test

How I Became a Bitcoin Convert