The ant busted his butt all year, growing some grain to store for the winter, while the grasshopper was lying about, playing the fiddle. When winter came, the grasshopper had no food, so he went to the ant’s house to beg for some. The ant told him to beat it, and the grasshopper starved to death. The end.

There’s a clear winner here. And yet, there are always people who look down on the working stiffs, the ants. They think that shlepping to work every day and diligently saving 20% of your take-home pay is boring.

A wonderful investing strategy is to put 90% of your money into safe assets with a stable return. Then you can speculate on moonshots with the remaining 10%, stuff that could give you 10X or 100X or 1,000X returns.

Most of the time, those moonshots won’t work out—they’re called moonshots for a reason. But sometimes, they do. I’ll give you a great example…

Adam had another friend who’d gone to Harvard business school, and this guy was starting an exercise bike company.

Adam thought it was a terrible idea. But he knew his friend was an exceptional guy. So, he invested $25,000.

Still, Adam thought it was a foolish move. Something like 90% of startups go to zero, and he figured that’s what would happen. But he took the risk anyway. And, over the next eight years, his $25,000 investment turned into $9 million.

The company, of course, was Peloton (PTON). 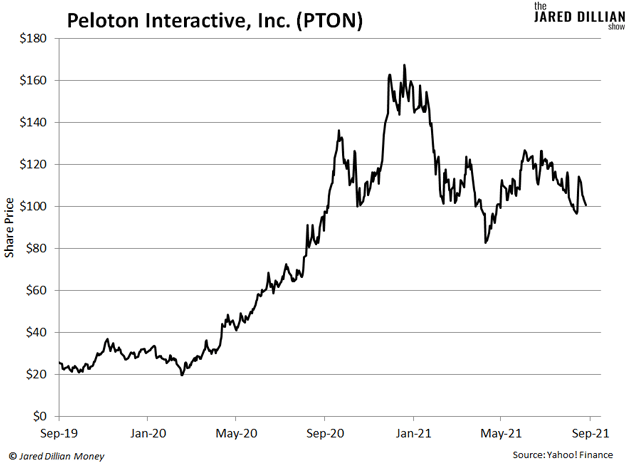 In one sense, my friend Adam was very lucky to know the founder of Peloton. But a lot of people, even if they have those connections, don’t take big risks—usually because they don’t have the cash or because debt is holding them back.

But when you have zero debt, cash on hand, the ability to recognize opportunities, and the willingness to take risks, the world opens up. You still want to keep 90% of your money in safe things, like The Awesome Portfolio. But you’re also free to put 10% of it in moonshots.

Taking moonshots is not the same as taking dumb risks. The idea is to bet on extraordinary people with big ideas.

Everyone has a buddy with a million-dollar idea. Some of these guys have a new one every week. And they’re more than happy to tell you about it over a beer, but that’s where it stops. There’s zero follow-through.

If your brother-in-law asks you to invest in his company, but you think he’s a loser, don’t do it. The company is going to fail, and your investment is going to disappear. Instead, reserve your moonshot money for the best people… the people who can push their ideas across the finish line.

Of course, if you don’t want to take any moonshots, that is okay, too. You have my blessing. There is nothing wrong with shlepping to work every day, saving 20% of your paycheck, and sticking it all in low-risk investments like the ones I lay out in The Awesome Portfolio.

There is nothing quite like the satisfaction of sitting on a pile of grain in the winter, with the grasshoppers starving outside, knowing that all the schlepping paid off.

Really, You Only Need to Do This Once a Year

Don’t freak out. Stick to the Plan.