My Standard Definition of a Bubble

Longtime readers are familiar with my background…

I graduated from the Coast Guard Academy in 1996, went to sea for two years, and then settled in the San Francisco Bay Area to work on the Coast Guard Pacific Area staff and go to grad school.

San Francisco was a pretty magical place back then. First of all, it was a lot cleaner. The Tenderloin has always been a mess, and Market Street has always been a bit gritty, but it was better than it is now. I never spent any time in Silicon Valley proper, but I went to business school at the University of San Francisco up at Lone Mountain, one of the most beautiful neighborhoods I have ever seen.

It had an entrepreneurship track in the MBA program, which I skipped. I was a finance major, and I was going to work on Wall Street.

Everyone else thought that was weird. Why would you go to the University of San Francisco if you are going to work on Wall Street? All my classmates were going to work in technology in some capacity.

So, my first-ever class at USF was financial accounting, and I remember the professor saying something about “venture capital.” I followed her into the elevator and asked…

I was about as unsophisticated as you could possibly get. And I was plopped in the middle of the one of the greatest stock market bubbles in recorded history. It took me a while to realize that was unusual.

I drove in and out of the city every day, and what I started to notice was that all the billboards were for internet companies. I remember a big one for WebEx right before I went over the Bay Bridge. I remember going to the Oakland Coliseum to see the A’s and seeing advertisements for Yahoo! and such.

This was before the time I spent on the P. Coast, where my firm once took me to dinner at a seafood place downtown called Blue. It was opulent beyond description. I had all the free food I could eat, so at least I was getting something tangible out of this bull market.

What I knew was that people were making money all out of proportion to their intelligence and work ethic, which has become my standard definition of a bubble.

There were some dumb people on that trading floor making very good money. Some of them were making ridiculous money. They were lucky enough to be in the right place at the right time, which they didn’t really realize.

One day, the San Francisco Chronicle sent some reporters down to the trading floor. They interviewed one of the traders, who said: “I can’t believe how much money I’m making!” 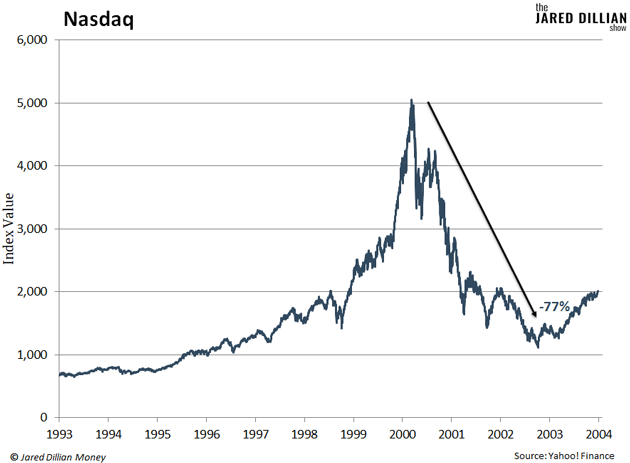 I bring this up because, in the past year, people who have no business keeping money anywhere but a bank account are speculating on cryptocurrencies, or meme stocks, or NFTs, or other things they really don’t understand. They’re downloading free trading apps and screwing around.

The problem here isn’t that people are making money. The problem is the risks they are taking to do it. Remember, our first goal here at Jared Dillian Money is to help you eliminate financial stress. And one of the main sources of financial stress is risk.

So, instead of putting energy into some speculative craze, now is a good time to assess your financial risk.

I do not know anyone who’s gotten rich screwing around on a trading app, at least not on a permanent basis. But I know plenty of people who have taken on too much risk and regretted it.

When Half a Million Dollars Isn’t Enough… Do This