You probably heard the news yesterday…

This is a big deal. Inflation hasn’t topped 8% since 1982—the year E.T. the Extra-Terrestrial dropped in theaters. 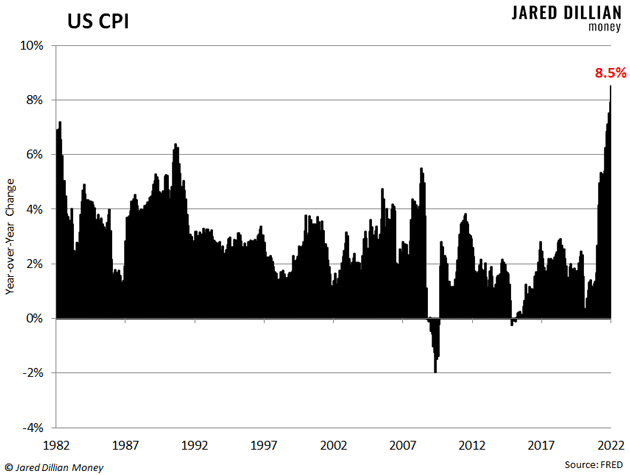 By now, we all know inflation has been in an upward trend since 2020, thanks in large part to the federal government’s runaway money printing. Everyone is talking about it, because it’s hard to miss when you’re paying $6 for a gallon of gas or $8 for a loaf of bread.

Now we’ve added a war into the equation…

For people in Ukraine, the war is the worst thing imaginable. But the war’s impact is also rippling throughout the world.

For us here in the US, the biggest effect is even more inflation—for all commodities, but particularly for food, fuel, and metals.

Meanwhile, international trade is breaking down, which is also contributing to inflation. This all feeds into an inflationary psychology, where people buy more than they need in the short term because they expect prices to rise, and that makes prices rise even more. It’s a self-reinforcing cycle. Inflation was bad before the war started, but now it’s accelerating to warp speed.

What You Can Do

First, stock up on staples at the grocery store. Chances are, food is going to get more expensive, and we may see more supply chain issues. There is no downside to having a cupboard full of canned beans.

Second, make sure you own some gold. Regular readers know my thoughts on gold—everyone should own some, war or no war. And yes, I think it’s a little weird that people invest in shiny rocks. However, they’ve been doing it for five thousand years. And while some people say technology will change that, it keeps happening.

The fact is, gold has maintained its purchasing power over a huge span of history, and that isn’t likely to change. You cannot say the same about the US dollar.

Gold is also the number one commodity to own in wartime, for reasons too numerous to mention here. Interestingly, gold will likely play a larger role in the financial system soon, as a result of Western nations freezing Russia’s currency reserves.

Third, get some exposure to commodities other than gold. Some people think that since we had a 20-year period where commodity prices went down relative to financial assets, we will have a 20-year period where commodity prices go up relative to financial assets. That is not so hard to imagine. And if you currently have a portfolio with zero exposure to commodities, it is best to get some now.

As it happens, three of my seven recommendations in The Wartime Portfolio offer more commodity exposure, so you should check it out just for that. You’ll also find four defense picks, which, no surprise, stand to benefit from increased defense spending as the war drags on and international attitudes shift. Pick up a copy of The Wartime Portfolio by clicking here.

The Perfect Portfolio for Any Environment (Even This One)

Enough with austerity. When is it okay to splurge?