How I Became a Bitcoin Convert

I was skeptical about bitcoin for a long time.

Largely because I don't like investment cults. People become obsessed with an idea, and it draws in a lot of inexperienced investors who end up getting hosed. They buy late, after the big money has been made, and then prices collapse.

The rapper 50 Cent was somehow involved, too. He said he invested in bitcoin… then claimed to have forgotten about the whole thing until realizing he’d made millions… then claimed that he’d never owned bitcoin in the first place.

It was a total frenzy. People who had never invested in anything were buying bitcoin with their credit cards. (If you’re new to investing, there are smarter ways to start.)

At the time, I was writing articles calling this the stupidest thing ever. I don’t like to see people whipping up speculation and sucking in innocent, inexperienced investors.

No surprise, some those inexperienced investors lost gobs of money. After its 2017 peak, bitcoin sank 83% over the next 12 months. 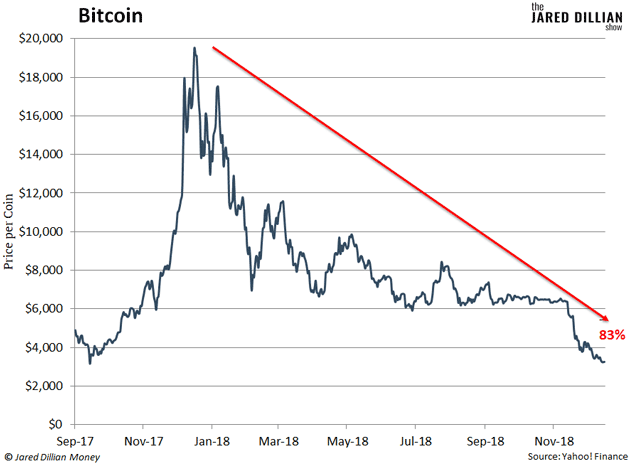 Today, bitcoin is back to about $13,700. It’s still a bit of a cult—there are bitcoin investors who say they’d never sell, no matter what.

But I’ve come around on bitcoin, mostly because it has massive potential as a store of value.

Everyone calls bitcoin a “cryptocurrency,” but it’s helpful to think of it as a digital asset.

See, a currency is a medium of exchange—you use it to buy other things. The US dollar, the euro, and the Japanese yen are all currencies. Depending on where you are in the world, you can use them to buy a pizza, or a watch, or a lawnmower.

There’s a famous story about an early bitcoin investor who bought a pizza with bitcoin. And a handful of businesses do accept it as payment. But that’s not what bitcoin is for.

Bitcoin is for storing value… sort of like gold, which we’ve talked about before.

See, much of bitcoin’s value comes from its scarcity. There are 18.5 million bitcoin tokens in existence right now. But the supply is finite—there can never be more than 21 million.

Unlike the dollar and other currencies, the supply is fixed. And there is no government or centralized entity that can increase it. So, like gold, I expect bitcoin to hold its value over time.

Major corporate players are coming around on bitcoin for the same reason.

In August 2020, business intelligence firm MicroStrategy bought $250 million worth of bitcoin. Here’s what the CEO had to say about it: “This investment reflects our belief that Bitcoin, as the world’s most widely-adopted cryptocurrency, is a dependable store of value…”

These are big institutional players, not bozos running around calling themselves “crypto rappers.” And they all see bitcoin’s potential as a store of value.

The Next Phase for Bitcoin

Bitcoin is moving through the same phases as other emerging technologies.

Typically, when a hot new tech comes on the scene, it goes through a boom phase, a bust phase, a basing phase, and a healthy bull market phase.

Bitcoin has already gone through the first three phases, as you can see in the chart below. 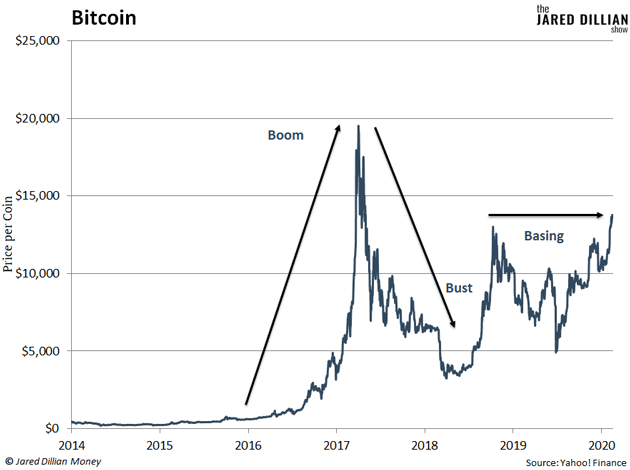 And now it’s entering the healthy bull market phase. This is when a technology hits critical mass and prices eventually surpass the highs reached in the initial boom phase (aka, the Bitcoin Jesus phase).

This is why I’ve come around on bitcoin—it’s now a mature technology with huge potential as a store of value. Now is a good time to consider adding some of it to your portfolio.

The Best Way to Election-Proof Your Investments

Hope Is Not a Strategy