She recently tweeted that President-elect Joe Biden should issue an executive order that cancels up to $50,000 in student loan debt—unilaterally for everybody.

Biden said Congress can pass a bill that benefits borrowers, which is absolutely within his legal authority. But just because you can, doesn't mean you should.

If you borrow money to go to college, who do you borrow the money from? You don't borrow it from a bank. Banks are out of the business.

The government took over the student lending business in 2009. It’s made $1.6 trillion in student loans. And all these people have gone to college. 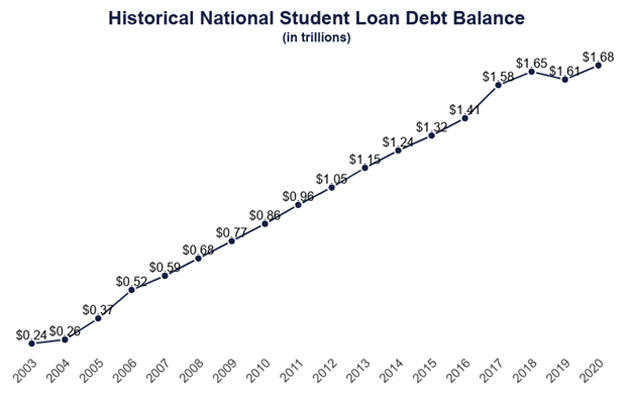 You can't do that to the government. It doesn't let you off the hook.

People call in to my nightly radio show all the time and ask how to pay off debt. I always say one of the first things you should pay off is student loans.

That's because they are dangerous. If you don't pay them off, they can follow you around forever.

It's really bad. People sign up for these things when they are 18 years old. They borrow $100,000 and have no concept of how big of a number that is.

Then the government charges 8% interest. It does this because it's not a for-profit enterprise.

If the government is really like a nonprofit, then why does it need to charge 8% interest?

The answer: It's unsecured lending.

With student loans, there is nothing to foreclose on. It's unsecured. And unsecured lending has higher interest rates.

Arguably, given the credit risks of these borrowers, the interest should be even higher… around credit card interest rate levels.

You go bankrupt, you still have the student loans, and they follow you around forever.

Also, if you don’t pay the full interest on a regular basis, it gets added to the principal.

They used to have loans like this in the housing market back in the mid-2000s. They were called negative amortization—NegAM—loans. They got rid of them because it just violates principles of fairness that you would take interest and add it to the principal and the principal gets bigger over time.

You've probably seen social media posts from people who have made payments for 10 years and their balances got bigger. 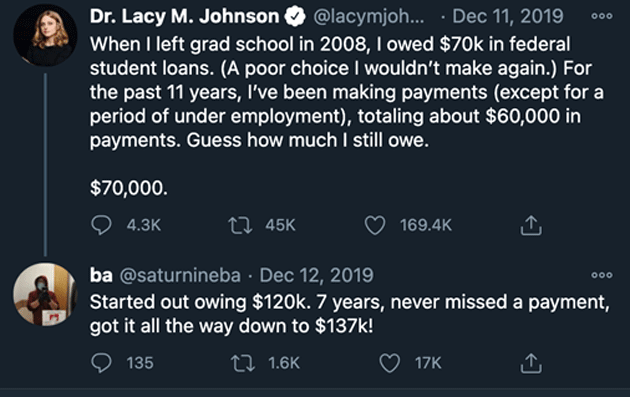 That's because they're not making the full interest payment and it gets added to the principal. It's very evil stuff.

These are the most evil loans of all time, and this is why you should pay these things off first.

The financial consequence is it all goes on the federal government's balance sheet. It just gets added to the government’s debt.

You might say, well, that isn't so bad, right? We've spent $27 trillion on other stuff. Why not spend $1.6 trillion on student loans?

Don't Expect the Rich to Pay

Everybody says well, rich people can pay for it. But the math doesn't work.

If you took the top 1% of taxpayers and you raised taxes on them to 100%, do you know how much revenue you would raise? You would raise $800 billion.

So you could tax rich people at 100%—take all their money—and you only get half the amount you need just for the student loans.

If you cancel student loans, everyone's taxes have to go up. Not just rich people’s.

Here's the Real Problem When You Cancel a Debt

It's a liability for someone. Someone has to pay. It's an asset for someone else.

The government is taxpayers. So we are shifting the cost of college onto people who aren't going to college.

Biden is wisely sidestepping the issue. That's because a lot of people feel strongly about this.

Like the people who worked their asses off to pay their student loans.

This Daily Habit Can Net You $6K Next Year

Take the Pain Out of Your Next Big Purchase