How much money do you need to make before you fly first class?

It depends on your income level and net worth—that goes without saying. But it also depends on how long the flight is, whether you can fit comfortably in coach, and whether or not you’re traveling for business.

Like a lot of people, I usually work on flights, even if it isn’t an official business trip. So, even if I only have an hour, I can get more done, and do it more comfortably, if I’m flying first class.

You also have to factor in the amenities. You get to check your bags for free with first class tickets. You also get to choose your seats, board first, and in some instances, you might get lounge access. Those amenities are worth something.

I flew to from Myrtle Beach to Nashville recently, with a layover in Charlotte. And when I pulled up the flights, coach tickets cost $300 and first class tickets cost $500. So, the difference was only $200.

This was a business trip, and therefore a business expense. And because of that, the extra $200 was really only an extra $120. So, for me, it was a no-brainer. It’s just a much better experience. 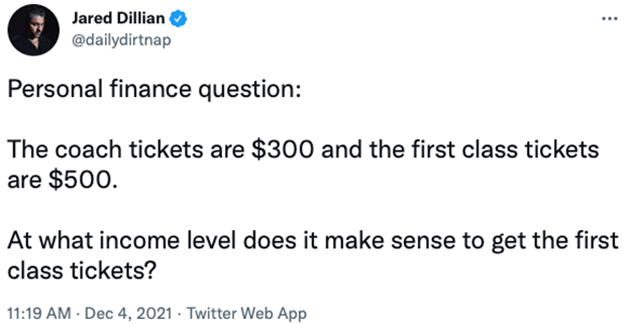 All things being equal, how much should you make before spending that extra $200 on first class?

If you make a million dollars a year, don’t even think about it—just get the tickets. And if you make $300k–$400k a year, it’s something you can splurge on sometimes.

Even so, $200 is also just one trip to the grocery store, or one trip to Target. It’s not nothing. But in the grand scheme of things, it’s not that much money, especially if it’s a very occasional expense.

We talk a lot about how the big things move the needle—the house, the car, the student loans. I would even say that travel is one of the big things. But a $200 expense, once a year or so, for someone making $300,000, is not going to make a dent. It’s a small luxury that someone in that income bracket should choose from time to time.

Now, I can afford first class by any measure. But I fly a lot, and I often fly coach. Or I buy a coach ticket, and I get upgraded. But in situations like these, where the upgrade is only $200, I just pay for it.

International flights are a different story…

The best time to fly first class is on an international flight, when someone else is paying for it. I did that when I was at Lehman Brothers, and it was amazing. But when it’s coming out of your own pocket, and the first-class ticket is an extra $8,000, that is a lot of money.

Long flights are miserable no matter what. And I just cannot bring myself to spend an extra $8,000 to be miserable for 12 hours. In some ways, I’m still a CF at heart.

Benefit from higher rents (without buying a rental)

Your Most Critical Financial Task of the Year