Sometimes you just have to spend money on stuff.

Let me give you a couple of examples.

We have this really great back porch. It's got rocking chairs, a big day bed, and a great view. 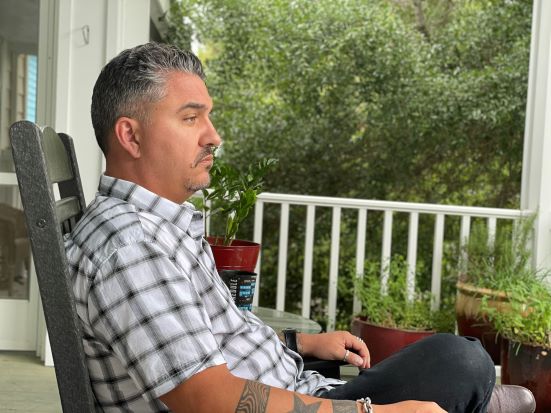 (This is me not falling to my death on my newly repaired porch. Source: @dailydirtnap)

We could tell that the porch was getting kind of old, the wood was getting soft... and one day I was walking around out there and my foot went through the boards.

Obviously, I didn’t want “fell through porch to his death” to be listed in my obituary, so it had to be repaired.

After calling around and getting some quotes... it was going to cost about $12,000. Ugh.

You know what sucks about that? The thing that grinds my gears is that $12,000 is a lot of money, and you're left thinking, "Gosh, what else could I have spent that on?"

The important thing was, I had the money on deck to save, well, my deck.

It wasn't invested. It was in cash, and it was there when I needed it.

This wasn't the first time I needed money in a hurry to make a home repair. A year earlier, I had to replace my roof. That was also around $12,000.

But again, the cash was on deck. And I plan to be ready for the next time—because there is always a next time.

Let’s say your “check engine light” blips on. That's an automatic $500 with the potential to be even more.

Your pet needs urgent care. Little Timmy breaks his arm. Your garage door goes on the fritz. Hooligans knock over your mailbox.

I file all of this under "Crap Happens"... because, well, it does.

The antidote to "Crap Happens" is to have a lot of cash on call to deal with what life throws at you.

How much should you set aside? Well, it’s...

More Than You Think

I'm a big fan of having cash on hand. It's liquid. It's there when you need it.

It not only helps you deal with "Crap Happens" but also helps you take advantage of opportunities.

But the coming inflationary wave is making the conversation on cash a little more complex.

For example, I usually recommend that your portfolio be composed of 20% cash.

But for the moment, I'm trying to become as close to fully invested as I can because I see inflation hitting 6% this year and perhaps 10% next year (we’re at 4.2% this year, up from 1.4% in January).

Those are NOT normal rates of inflation, by the way.

Which is the only reason I would deviate from The Awesome Portfolio composition of 20% cash.

But What About My Everyday “Crap Happens” Cash?

I always say you should have $10,000 or six months of living expenses socked away.

That's the minimum. Really, you need to save as much as possible.

One year of expenses should be your next goal.

Does my view of "Crap Happens" cash change with inflation?

You need liquidity for emergencies.

Having it tied up in stocks, bonds, gold, or real estate is not ideal if you need that money TODAY.

Put your “Crap Happens” cash in the highest interest-bearing savings account you can find and leave it there until you need it.

Because it's not just car trouble or a home repair that you could need cash for.

Here's Something No One Expects...

Let's say you, or a family member, gets in trouble with the law.

Your child gets a DUI. There are court costs and probation. Depending on the situation, your child may need to enroll in a rehabilitation program for their mental health.

A friend of mine, Michael Kimelman, was trading for a hedge fund on Wall Street.

Back in 2009, he got accused of insider trading.

The FBI raided his house at six in the morning while his family looked on. It was crazy.

He actually got convicted and went to prison.

As all this was going down, he had a conversation with his attorney and commented, "If this goes to trial it's going to cost me millions of dollars."

Now, insider trading isn't something many people are going to deal with in life.

But my point in sharing his story is this: You want to be able to afford good representation.

Because, although most public defenders are good at their job, they are extremely overworked.

You'd be better off paying for good representation than gambling on the chance you'll get a public defender who's had enough sleep to fight your case.

Which is why, in all reality, you’d be best off having “Crap Happens” cash equal to 50% of your income.

Hope for the best. Plan for the worst.

But What About Inflation?

The necessity of having cash on hand doesn't mean you shouldn't take steps to hedge yourself against inflation.

You need to protect your investments and your retirement.

I wrote about this last week—which you can check out at your leisure.

I also have specific investing ideas laid out here.

P.S. My friend’s book is called Confessions of a Wall Street Insider: A Cautionary Tale of Rats, Feds, and Banksters. I plan on having him (Michael Kimelman) on The Jared Dillian Show to talk about his experience soon. It’s a really amazing story.

Everything Is a Trade