Actually, you’re not screwed. This is a fixable problem.

Let’s talk about what happens if you’ve made a huge mistake.

Maybe you have some debt. Or you’ve lost a big chunk of money in the stock market. And you think, “It’s too late—I’m screwed.”

Actually, you’re not screwed. This is a fixable problem.

Look, you are still going to get Social Security. But everybody knows that isn’t enough for a decent standard of living—even if you wait and start drawing Social Security at the last possible moment (which you should).

If you’re planning to rely on Social Security, life is going to be very unpleasant. Those stories about people eating dog food—they’re kind of urban legend, but they’re also kind of not.

The only way you’re really screwed is if you’re retiring tomorrow. If you have any time left on the clock, even just five years, you can stage a comeback.

There’s only one way to do it: Austerity. Save until it hurts.

At Least Half of Your Pay

If you’ve waited until your 40s or 50s to start saving, you need to sock away at least 50% of your take-home pay.

Maybe you have a family, kids, a house. All of that stuff is expensive. And you’ll need to make some big cuts to pull this off—possibly a smaller house in a low-rent neighborhood… definitely no trips to Hawaii.

This is going to hurt a little. But choosing austerity now, while you’re in your 40s or 50s, is infinitely better than letting poverty force you into austerity in your 80s. Unless, of course, your dream retirement consists of canned beans and endless reruns of The Price Is Right.

No Wine Fridge, No Jet Skis

I’m not a huge fan of budgets. You simply have to save until it hurts. What does that look like in practice?

Say you’re driving down the road, and you get thirsty. You think about stopping at Burger King for a large Diet Coke. But you’re practicing austerity now, so you don’t spend the $2.50. You keep driving, and you stay thirsty.

Basically, if you’re doing it right, you will experience discomfort. Physical discomfort. Because you’re…

None of this stuff requires you to stop living your life. But you will need to live differently for a while. No wine fridge. No jet skis. No panoramic sunroof.

One—you wake up at age 50, realize you haven’t saved a dime, freak out and do nothing about it. Fifteen years later, you still have $0 saved.

Or two—you wake up at age 50, realize you haven’t saved a dime, freak out and start saving half of your take-home pay.

It feels impossible at first, but you make it happen because…

You think about retiring, but you’re healthy, so you keep working for another five years. Then you hit 70, and you’re really ready to retire. And you can!

Because you now have $1.26 million in your retirement account. 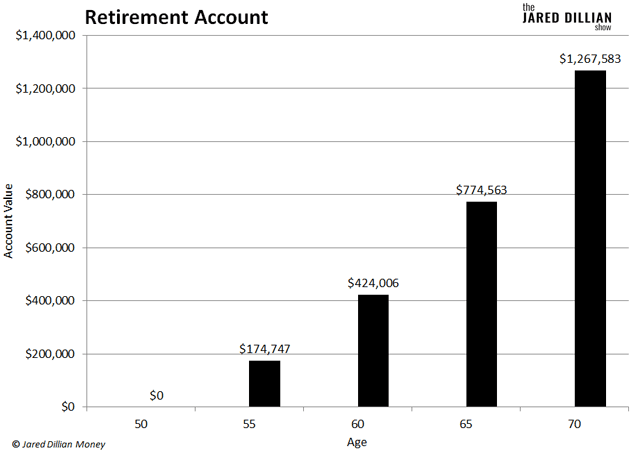 And you got there by putting up with a little bit of discomfort.

Open Up a Can of Chef Boyardee

My life is the opposite of austere now. But I’ve made those kinds of sacrifices before.

When I was at Lehman Brothers, I lived far below my means, even though many of the people around me were living far above theirs. I bought a tiny, cheap house in a neighborhood that didn’t even qualify as “up-and-coming.” I wore cheap Men’s Wearhouse suits. And I ate cans of Chef Boyardee for lunch.

It wasn’t glamorous. I know this stuff is hard, but it is doable.

I have one family member who made it to 45 or 50 without saving anything. Then she got religion about saving and became a millionaire.

She has a great retirement. And you can, too.

You’re Not a Jerk If You Charge Your Friend Interest

How People End Up Broke & Divorced… or Worse